With A Son in the Military, Roger Tayfel Has A Deeper Appreciation for the Stress it Places on Family Members Back Home

“Whatever we have going on, that will be a priority. We’ve all had moments in life where we needed a little help, and we’ve tried to instill in our kids that if you can, you should lend a hand.”

Roger Tayfel’s daughter, Paige, was weighing her options for a summer job when school was wrapping up in the spring of 2019.

“She really wasn’t interested in working at a fast food restaurant or in retail,” he recalls, so he suggested she start a small side business, like cutting grass. The idea stuck, and the two of them embarked on what Roger figured would help his daughter earn some extra summer cash. 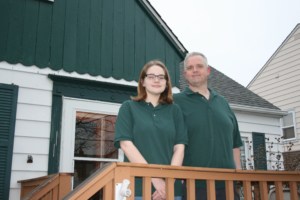 Roger Tayfel and his daughter, Paige, have teamed up to help a military family with their yard while the husband in deployed.

“I thought she’d do like five lawns and that would be it, but it turned into 25 lawns and it kept us pretty busy for a part-time gig,” Roger explains. “I ended up really enjoying it.”

They christened their joint-venture Yard Haulers, and operated out of the family home in Willowick, Ohio, a suburb of Cleveland.

With a plan to grow the business in 2020, Roger headed to the GIE + EXPO in Louisville last October to check out some of the larger mower and equipment options for their burgeoning business. While he was walking the trade show floor, he came across the Project EverGreen booth and discovered the GreenCare for Troops program and was quickly sold on the mission it was committed to.

“My son is in the military, and when you have a kid overseas your perspective is a little different,” says Roger. “You get a better understanding of what families go through. When I heard about GreenCare for Troops, I knew we had to be part of it. I came home and told Paige about it and she was really excited.”

One of their current matches is a family of four with a husband who’s deployed through the fall, and a mother who’s pregnant.

“They have a huge yard, and you can imagine the stress of trying to handle that alone when your spouse is deployed halfway around the world,” says Roger.

As Paige approaches graduation, Tayfel says she’s remained committed to the business. And both are totally committed to servicing at least one family through the GreenCare for Troops program.

“Whatever we have going on, that will be a priority,” says Roger. “We’ve all had moments in life where we needed a little help, and we’ve tried to instill in our kids that if you can, you should lend a hand.”

Mission accomplished for the Tayfels and the military family they look after.

Are you ready to step up and become a volunteer for a military family? Register today at  https://projectevergreen.org/about-the-program-volunteers/

February GreenCare and SnowCare for Troops by the Numbers